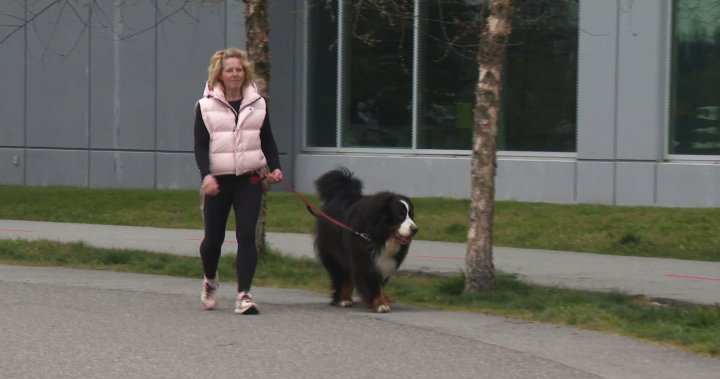 A B.C. woman is sharing her story about dealing with ICBC and its recently-introduced no-fault insurance model.

Last December, Victoria Ward was walking to her car parked on the side of the road when she was struck by a car passing by.

All of a sudden she said she was “on the ground.”

She said she put her hand to the back of her head and realized she was bleeding.

“I crouched down by the side of my car and realized the stuff I was carrying was all over the road and then a neighbour came flying out and said ‘sit still’. I knew then I’d been hit by a car,” Ward told Global News.

Ward said the woman who struck her did not flee the scene but she told Ward she got “in her way.”

However, the neighbours had a porch camera and police could see Ward was not in the middle of the road as the driver had claimed.

“We’re assuming that maybe she had a beep go off in her car and she swerved last minute and that is what the ambulance driver and the paramedics said saved my life, otherwise I would have been pinned between her car and my car.”

Ward suffered from a concussion, had to get staples in her head, her spine was rotated in the collision that affected her right shoulder, elbow and knee and she had bruises covering her body.

2:11
Vancouver cyclist charged thousands to repair vehicle that hit him

She said it has prevented her from teaching fitness classes and re-opening her daycare after being forced to close it while she was battling breast cancer.

In addition, Ward said she has been having a hard time dealing with ICBC.

“So far, ICBC, they haven’t done anything,” she said. “I had forms to fill out, I have sent in the forms, they then requested another doctor’s follow-up a few months later. They told me they will pay for 10 physio and 10 massage therapies but what they don’t let you know is it’s not completely covered because of course, now massage and physio is a lot more expensive than what they hand out or what quote for you so I was offered those 10 sessions for each and that’s pretty much it so far.”

She did go to some sessions but she needs more time to heal.

‘A punch in the gut’: Vancouver cyclist charged thousands to repair vehicle that hit him

B.C. lawyer Josh Woods, who is familiar with Ward’s case, said with the changes to ICBC’s Enhanced Care Model, a lot of people are “falling through the cracks.

“This is obviously a case where the accident is on camera, there’s no question about what happened here. (Ward) was a pedestrian, struck by a car driving on the wrong side of the road. And so, I do think a lot of people, and in fact I hear from people every single day in my business who are injured, through no fault of their own, and they’ve been told that ICBC’s going to be there for them and it’s just not the case.”

2:11
Drivers in BC won’t see money back as ICBC expected to make massive profits

Drivers in BC won’t see money back as ICBC expected to make massive profits – Mar 3, 2022

Woods said the Enhanced Care Model takes a look at the person’s life the day they got injured. In Ward’s case, she was still undergoing cancer treatments at the time of the accident and so had reduced her workload because of that.

“But now as she recovers from cancer and she’s ready to get back out into the working world, even though it’s her injuries from the car accident that are stopping her from working, that doesn’t matter anymore,” Woods explained. “Under the old system, (Ward) would have had the right to sue the driver that hit her and be put back into the position she would have been in, had this accident not happened. But unfortunately, now, she has been left out in the cold.”

Under ICBC’s no-fault system, wage losses are covered but Ward was being treated for breast cancer at the time and because she wasn’t working, she doesn’t qualify.

Woods said Ward is entitled to the Enhanced Care Benefits but ICBC will only pay for a portion of those costs and Ward will have to cover the rest.

“It’s a real shame because given the statutory system, what’s happening here is almost a two-tier system of extended health benefits,” Woods said. “If you’re rich enough, if you’re fortunate enough to have the resources, you can go see any physiotherapist you want, pay for that out of pocket. But in the circumstance where you, take (Ward) for instance, you’re recovering from cancer and you don’t have the economic means you otherwise would, you’re limited to essentially taking the $74 that ICBC will give you and you have to make up the shortfall yourself.”

Ward said she now has to look at listing her home and moving somewhere smaller as she still has two kids living at home and needs to take care of them.

She said she would like to see an investigation at least, especially as there is video evidence.